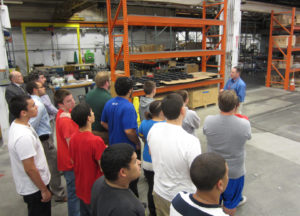 The North Central Massachusetts Development Corporation (NCMDC) was awarded an $8,000 matching AMP it up! grant from MassDevelopment to support its efforts to respond to the region’s shortage of skilled workers in the manufacturing industry.  Working in partnership with Mount Wachusett Community College, Fitchburg State University, the region’s public schools, and local manufacturers, the NCMDC will utilize these funds to support its efforts to raise awareness of career paths in the advanced manufacturing field.

“We’re very excited about this opportunity to continue our efforts with our partners in the community and address the region’s workforce challenges,” stated Roy Nascimento, President & CEO of the North Central Massachusetts Chamber of Commerce and its development arm the North Central Massachusetts Development Corporation. “These are high skilled jobs that attract employers and serve as a gate way to the middle class for many people” he continued. “Ensuring the next generation is ready to fill these roles is absolutely essential.”

“There’s a stigma attached to these careers,” explained the NCMDC’s Public Affairs Manager, Christopher McDermott. “Peoples’ perception of the industry is largely based upon what it was a century ago. They don’t realize that careers in a modern facility involve far more skill and growth than they did before.”

The grant will be used to continue the momentum sustained from receiving this grant in previous years by continuing outreach to audiences that are not typically associated with careers in manufacturing and aims to target a new audience for a potential future workforce.

Outreach will highlight the exciting, technology-driven, well-paying career options in manufacturing, dispel common myths about the industry, and bolster the prospective employee base for these quality jobs with North Central Massachusetts companies.

MassDevelopment established the Advanced Manufacturing Program (AMP) to address the loss of skilled labor and knowledge that will arise as Baby Boomers leave the workforce. The problem is particularly acute in North Central Massachusetts, which is home to over 440 manufacturing firms and relies on this industry for roughly a quarter of its employment. Regionally, roughly 32% of those employed in manufacturing are over the age of 55, while 18 to 35 year olds rank manufacturing dead last among industries in which they would choose to begin a career.