Add in the intellectual resources provided by some of the nation’s top colleges and universities and it’s easy to see why Massachusetts provides fertile ground for business growth. The North Central region can take advantage of all the business-supporting resources of Greater Boston and Worcester while offering attractively priced commercial and industrial real estate. Housing is more affordable here too, with choices ranging from antique homesteads in pre-revolutionary villages to historic farms, custom homes and modern condominiums.

North Central Massachusetts has much to offer its visitors from serene farmlands and rivers to the energetic Great Wolf Lodge. Here you can spend a day skiing at Wachusett Mountain Ski Area or take your kids to experience all that Davis’ Farm Family Adventure has to offer. The region is filled with a rich history and fascinating museums ready for you to explore. With all the attractions that the region has to offer, you’ll have a hard time picking what to do. Whatever your interest, and whatever your age, you’ll find the perfect destination – and not so far away. Visit our affiliate Visit North Central Massachusetts for more information on everything the region has to offer visitors and residents.

Since its founding, in 1994, Visit North Central Massachusetts has been very successful in branding the region and growing the economic impact of the industry. In 2004, tourism represented approximately 286 jobs and $2 million in wages in the region’s hospitality industry. Today, it accounts for over 800 jobs and over $24 million in wages. In 2004, VNCMannually generated $14.3 million of economic activity and $7 million in direct expenditures by visitors and $5.4 million in secondary spending. Today, tourism in North Central Massachusetts conservatively generates over $131 million of direct spending and over $4.6 million in tax revenues for our communities.

Whether you’re planning a week-end getaway or vacation, making arrangements to bring a tour group in by bus or need help with planning a meeting or sports event, the experienced staff at VNCM are available to assist you. Contact VNCM at 978.353.7604 ext. 244.

North Central Massachusetts has a rich history in Manufacturing Tradition, including the birthplace of American plastics industry in Leominster, the area is home to more than 430 manufacturers, including dozens of multinational corporations. Companies range from the world class plastics industry cluster of more than 140 companies to pharmaceuticals to photonics and paper, as well as biomedical devices. A strong and stable business base exists here, as well as rapidly growing industrial/commercial areas such as Devens Business Park.

The North Central Massachusetts Chamber of Commerce and its affiliates remain committed to supporting and growing this critical sector of our economy. Contact the Chamber at (978) 353-7600 for assistance or more information on resources available.

North Central Massachusetts is strategically located within an hour’s drive from Metro Boston and thirty minutes from Metro Worcester with easy accessibility via Route 2 serving as an east-west corridor with fast connections to Route 496, 190 and 91 for north-south travel. Commuting is easy with in the region and for Boston commuters, the MBTA offers train service from intermodal centers in downtown Fitchburg and West Fitchburg extending into Boston with convenient stations in North Leominster Shirley and Ayer. Even air travel is convenient in North Central Massachusetts with private jet service at the Fitchburg Regional Airport and at the Worcester Regional Airport. Major international airports in Boston, Providence and Manchester, N.H. are no more than 90 minutes away. Freight rail services are primarily provided to the North Central region by three carriers: CSX; Pan Am; and Providence-Worcester. These carriers have multiple connections with each other and provide very thorough coverage throughout the region and beyond it to the entire country. Public Transportation is provided to most of the communities in the region by the Montachusett Regional Transit Authority (MART).

CSX:
Operates a freight rail line from Leominster to their rail yard in Framingham, as well as freight service from Ayer to Worcester. The connections in Framingham and Worcester are linked as part of a CSX system that runs from Boston along the I-90 corridor to Albany, NY and from there to NYC, the entire Eastern seaboard, and as far West as Chicago, St. Louis, Memphis, and New Orleans.

PAN AM:
Formerly known as Guilford Rail, Pan Am operates the primary rail line along Route 2 as far as Albany, and also along Route 91 from CT into VT. Along with their access rights to other rail lines, they can provide freight service from North Central MA to Boston or Albany, and from White River Junction, VT to New Haven, Waterbury, and Derby, CT, with a connection at their own line in Greenfield, MA. Pan Am and Norfolk Southern recently announced a partnership to make improvements to the entire rail system between Albany and Boston, with improvements to the tracks and facilities expected to improve transport times.

PROVIDENCE-WORCESTER:
Their primary regional line runs from Gardner to Worcester, with connections to other operators in both locations. Also operates lines through RI and CT, as well as providing freight service up through VT to the Canadian border. 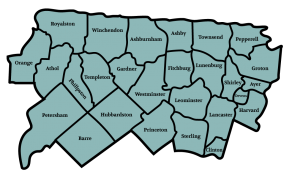